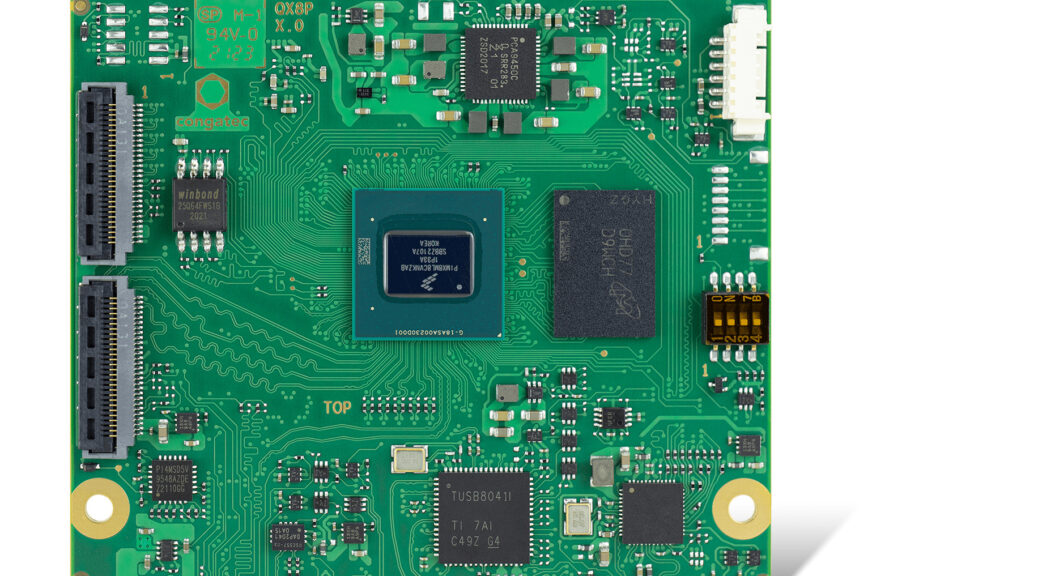 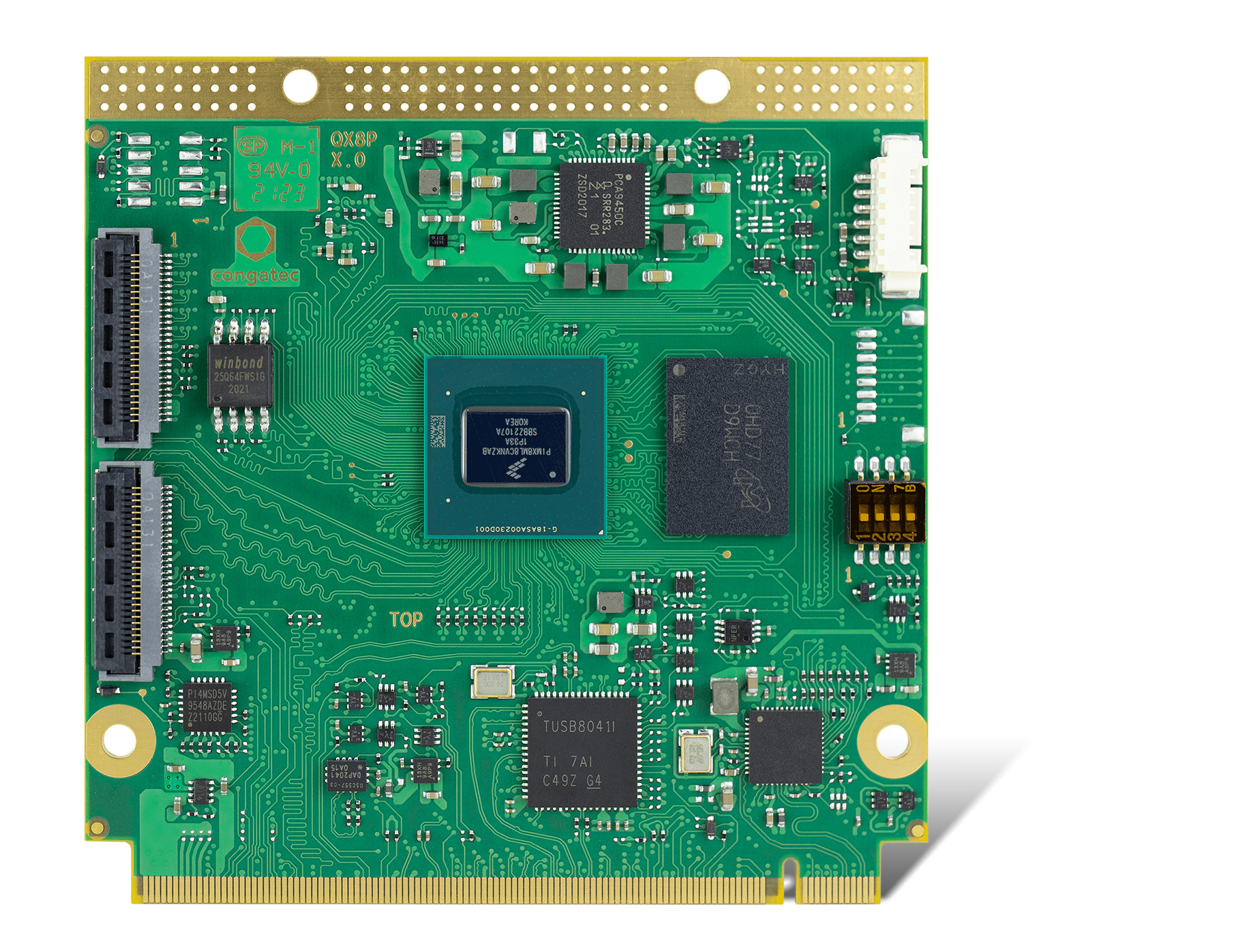 congatec – a leading vendor of embedded and edge computing technology – celebrates the 15th anniversary of Qseven Computer-on-Modules with the introduction of the conga-QMX8-Plus, a brand new Qseven module based on the NXP i.MX 8M Plus application processor. This next generation processor platform is the perfect upgrade for all NXP i.MX 6 based Qseven applications that have been running in the field for many years. It brings modern machine learning and AI capabilities as well as TSN support for real-time Ethernet to those applications and will extend their life time by an additional 10 to 15 years, maximizing the return on investment for such systems.

The powerful new Qseven module is based on the i.MX 8M Plus application processor with 1.8 GHz Arm Cortex-A53 quad-core performance and an additional integrated neural processing unit (NPU) with up to 2.3 TOPS. As the first i.MX processor with a machine learning accelerator, the i.MX 8M Plus provides substantially higher performance for deep learning inference and artificial intelligence at the edge. At a typical ultra-low power consumption of just 3 watt, the new conga-QMX8-Plus module delivers a performance boost of more than 150 %, supported by the 64-bit architecture and onboard LPDDR4 memory with up to 6 GB. Highly energy efficient Arm performance, machine learning capabilities and Ethernet with TSN support enable even more powerful and smarter embedded and IIoT connected edge systems at the edge. Vertical markets for these low power modules range from industrial controls, smart robotics and factory automation to medical health care and retail, and from transportation and smart farming to smart cities and smart buildings.

“Since we introduced the first Qseven module based on the NXP i.MX 6 processor, Arm technology has established itself as a widely accepted architecture for standard Computer-on-Module technology. The new NXP i.MX 8M Plus processor has now enabled us to offer massive improvements for Qseven based edge devices, not only in terms of computing performance but also regarding new capabilities for networking, vision and AI,” explains Martin Danzer, Director Product Management at congatec, and goes on to highlight the most important advantages: “This makes the new module perfect for Qseven designs that want to address new requirements in the embedded market, leveraging the new features for deep learning inference, predictive maintenance analytics and object recognition. But it also offers a perfect solution to upgrade existing i.MX 6 designs.”

“The new Arm Cortex based Qseven module from congatec underlines the importance of the Qseven specification, which is world leading in terms of vendor modules and community contributions,” explains SGET Chairman Ansgar Hein. The highest representative of the manufacturer-independent specification is also confident about the future: “We are celebrating the 15th anniversary of Qseven this year. With this new module generation offering long-term availability of at least 10 years, I am more than confident that we will also be around to celebrate the 25th anniversary.”

The i.MX 8M Plus processor improvements

Existing and new applications can now benefit from silicon manufactured in 14nm process and leverage lowest power consumption of typically 3 watt, 64-bit support instead of 32-bit and up to 6 GB LPDDR4 memory including inline ECC support instead of only 4GB. Also new are: AES encryption for higher cyber security, the image signal processor (ISP) for parallel real-time processing of high resolution images including H265 decoding/encoding, a high-quality DSP that enables speech recognition applications, and the NPU that adds 2.3 TOPS of dedicated AI computational power for machine and deep learning inference. The integrated Cortex-M7 further provides real-time control together with a TSN-capable Ethernet port and can also be used as a fail-safe unit. Next to an encryption module (CAAM) for hardware-accelerated ECC and RSA encryption, the Arm TrustZone also integrates the Resource Domain Controller (RDC) for isolated execution of critical software, and secure High Assurance Boot mode to prevent the execution of unauthorized software during boot.

The feature set of the new Qseven modules in detail

The new conga-QMX8-Plus Qseven modules are equipped with 1.8 GHz Arm Cortex‑A53 quad-core based NXP i.MX 8M Plus processors for the industrial (0°C to +60°C) or 1.6 GHz variants for the extended (-40°C to +85°C) temperature ranges. The modules can control up to three independent displays, connected via natively supported HDMI 2.0a, LVDS 2x24bit and MIPI-DSI, and provide hardware accelerated video decoding and encoding including H.265 so that high resolution camera streams delivered by two integrated MIPI-CSI interfaces can be sent directly to the network. For onboard data storage, the modules provide up to 128 GB 5.1 eMMC, which can also operate in safe pSLC mode, as well as 1x onboard µSD socket. Peripheral interfaces include 1x PCIe Gen 3, 1x USB 3.0, 3x USB 2.0, 4x UART as well as 1x CAN FD and 14x GPIO. For real-time networking, the module offers 1x Gbit with TSN support. 2x I2S for sound rounds off the feature set. The supported operating systems include Linux, Yocto and Android.

Further information on the new conga-QMX8-Plus Qseven Computer-on-Module from congatec can be found at: https://www.congatec.com/en/products/qseven/conga-qmx8-plus/