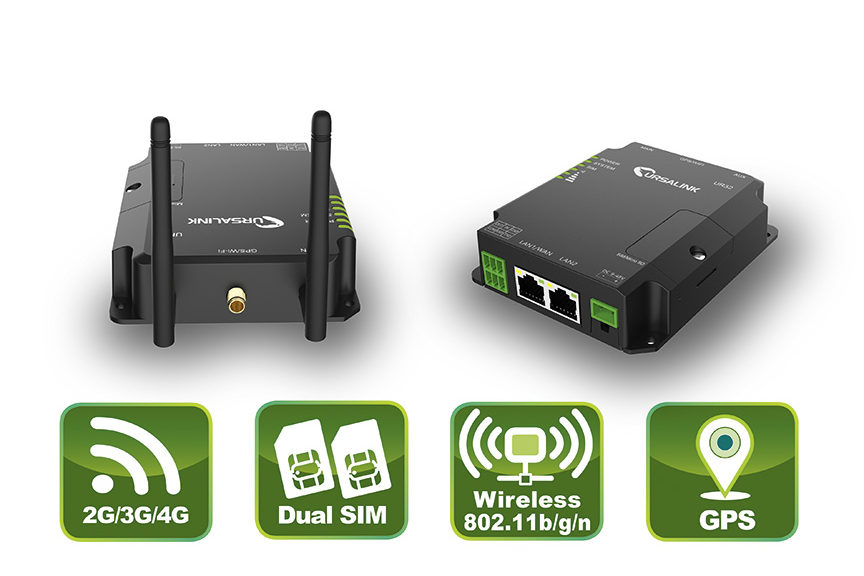 Three characteristics distinguish the UR32 mobile router series from ICP Germany. One is the housing format, which makes the router particularly compact. Secondly, the equipment variants, which make the router both inexpensive and versatile. The compact IP30 protected metal housing is 108 mm long, 90 mm wide and just 26 mm high. Built into the housing is the main board, on which the router’s many functions are provided. The core is an ARM Cortex A7 with 528MHz clock speed, pre-installed 128MB DDR3 RAM and 128MB Flash memory for the router operating system. Two 10/100 Base-T network interfaces are available for communication with peripheral devices, which can be configured in a combination of 1x WAN and 1x LAN or 2x LAN. The LTE/3G/2G mobile radio modem features secure data transmission. The LTE/3G/2G mobile radio modem establishes a simple connection between several network operators through its dual SIM functionality and includes a failback/failover function. In addition, the connection can be extended by security frameworks such as IPsec, OpenVPN, GRE, L2TP, PPTP or DMVPN. Central authentication and authorization are realized by Radius, TACACS+, LDAP or local accounts. Three optional extensions of the router are available: WLAN functionality, according to standard IEEE802.11b/g/n with WPA/WPA2 authentication and WEP/TKIP/AES encryption, which supports operation as an access point or client mode. GPS module with NMEA 0183 protocol. Power over Ethernet functionality for alternative power supply of the router. Standard features include a digital input and output and an RS-232 communication port with speeds from 300bps to 230,400 bps. The UR32 supports transparent mode as TCP client/server or can be used as a Modbus gateway (Modbus RTU on Modbus TCP). The power input is 9 to 48 VDC with the router typically consuming 1.9 watts, or a maximum of 2.4 watts in PoE mode. The router is designed for use in a temperature range of -40°C to 70°C, with best performance up to 60°C. The UR32 is easily configured via the Web GUI or CLI. If multiple devices need to be managed, the use of the DeviceHub is recommended, which allows easy and centralized management.

To be seen live at the Embedded World in Nuremberg in Hall 1 Stand 201.