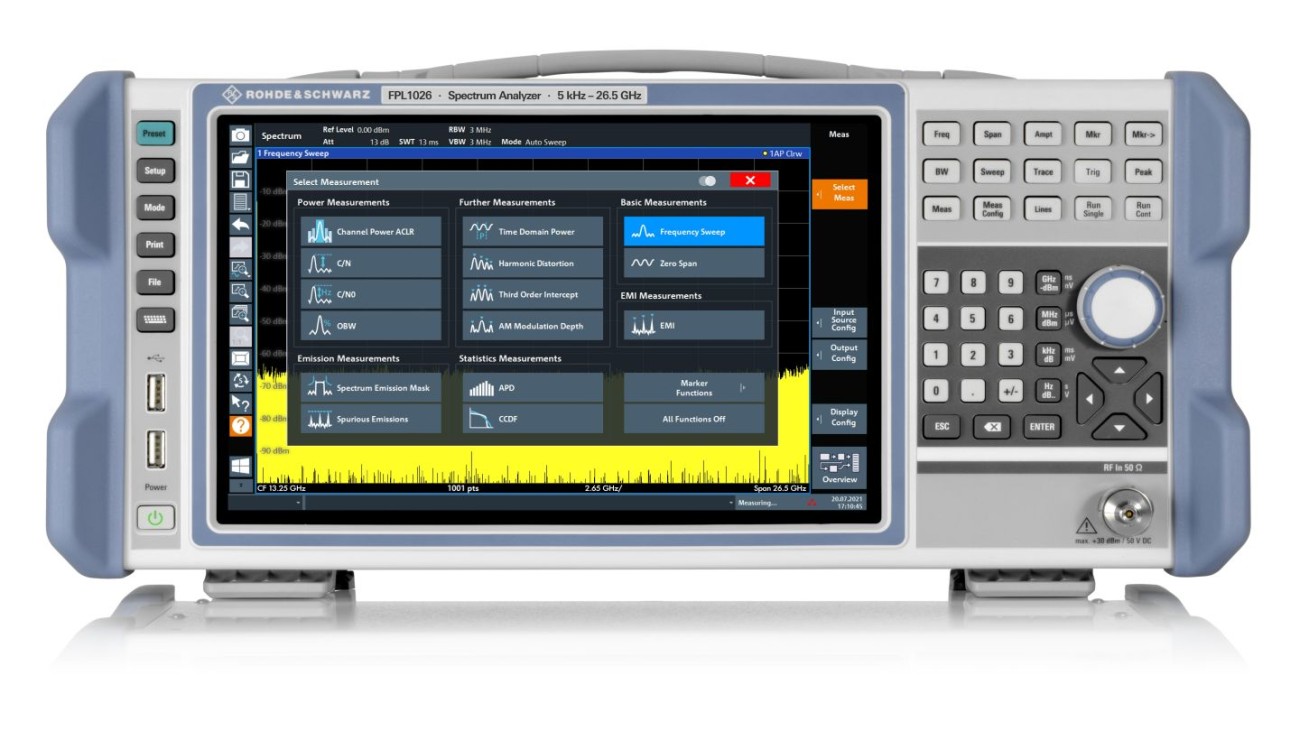 New base models for the portable R&S FPL1000 take spectrum and signal analysis capabilities up to 26.5 GHz. They combine the functionality of benchtop instruments and the portability of a handheld instrument, with intuitive features to make high performance measuring on the go fast and simple.

Rohde & Schwarz has extended its popular R&S FPL1000 family with the introduction of new base models offering measurement frequencies up to 26.5 GHz. For the series, two new models have been added to the range, providing capabilities from 5 kHz to 14 GHz and 5 kHz to 26.5 GHz.

The R&S FPL1000 is a single measuring instrument for general purpose applications and various types of measurements. It can analyse signals with a bandwidth of 40 MHz, and it is the only instrument in its class with battery operation that features an internal generator up to 7.5 GHz. It is the go-anywhere instrument for spectral measurements, for highly accurate power measurements with power sensors and for analysing analogue and digitally modulated signals. Even in its basic configuration, the R&S FPL1000 is quick and intuitive for measurements including: spectrum analysis with measurement functions such as channel power, ACLR, signal-to-noise ratio, spurious, harmonic distortions, third-order intercept point, AM modulation depth. Capabilities extend further to include statistical ADP and CCDF analysis and versatile marker functions.

Measurement applications are also available for analysing analogue and digitally modulated signals. The R&S FPL1-K7 option turns the R&S FPL1000 into an analogue modulation analyzer for amplitude, frequency and phase-modulated signals. The base unit’s I/Q analyzer supports the magnitude and phase presentation of I and Q within the analysis bandwidth. The I/Q data can be exported for further analysis with third-party software products. The R&S FPL1-K54 provides EMI measurements for diagnostics of RF interference. The R&S FPL1-K70 vector signal analysis option also characterises digitally modulated single-carrier signals. There are additional options for multi-modulation analysis and measurement of BER on PRBS data.

The R&S FPL1000 spectrum analyzers with new frequency ranges are part of the R&S Essentials portfolio. All models are now available from Rohde & Schwarz and selected distribution partners.